“A place belongs forever to whoever claims it hardest, remembers it most obsessively, wrenches it from itself, shapes it, renders it, loves it so radically that he remakes it in his own image.” – Joan Didion

A Room with a View

We had been driving for a while, not sure whether this road we were on, would lead us to the right place. Everything was different now. What once were wide open fields and forest, had now transformed into a mini suburbia. It was difficult to navigate by only old images serving as maps for the familiar road taken some forty years ago.

“There, take a turn here!” I pointed out to the direction looking to lead to were I wanted to go.

The car swerved and after a moment, I started recognizing familiar landmarks, still standing after all these years despite the changes. The big boulder standing proudly at the very edge of the ledge. As
kids we use to play and re-enact our favourite TV shows, pretending the rock was part of an alien planet.

Driving further and deeper into the woods, the distances between houses were getting longer and soon I was able to see recognize some of the places long since forgotten. We had finally arrived.

Stepping out of the car I noticed the neighbours’ house was still standing on the accompanying lot, still as run down as it had been all those years ago. I wondered if anyone actually lived there anymore.

Looking at the empty spot where our home had been, I could still see some of the rocks which had been part of the foundation of the house once standing proud, laying scattered After neglect and abandonment, the run down building had finally been demolished.

I walked around in the tall grass, feeling nostalgic and remembering how it used to be. As I closed my eyes I am transported back to the old house, my playhouse, the house I was born in.

It was a warm summer’s day. I could smell the freshly cut grass and see all the flowers in bloom. The field surrounding the house was filled with yellow, the colour of dandelions.

As kids, it was really fun to blow off the seeds when the flowers had bloomed and were ready to pollinate. Little did we know we were actually helping the flowers to spread. They looked like skydivers as they slowly landed on the ground.

I turned and looked at my home, the raw wooden exterior, no creature comforts, such as running water or toilets. The outhouse was a little farther up the hill, covered by tall trees and bushes. Someone probably thought it would be a good place to hide it, so the onlookers would not find out the people actually went to the toilet in those days.

As I moved closer, I saw my grandmother sitting in the swing. She loved that swing. She sat there for hours on end, watching us kids play in the yard. I waved to her and continue inside. I was thirsty and I knew there was a pitcher of cool lemonade in the kitchen. In those days a refrigerator was a luxury and we did not have one.

To keep things cool, there were sort of holes or wells dug into to the ground, filled with cool ground water. The food was then put into a bucket and lowered into the hole. Our kitchen had one in the middle of the floor and it was handy especially during hot days like this one was.

The house itself was small, two bedrooms, a living room and the kitchen. There was electricity coming into the house, for lamps and such. And of course to the piece de resistance, the television. The only one in a ten mile radius. The neighbour kids and I used to gather in the house every Sunday afternoon to watch our favourite TV show, Thunderbirds. Even grandfather sat with us kids and watched the show in awe.

As I entered the house, I walked through a small foyer: It was really a tiny space between two doors before actually entering the inside of the house. When guests arrived, there usually was a queue waiting for entry into the house. Each in turn taking off their shoes, leaving them in the foyer and then entering.

I quickly stepped out of my clogs and entered the kitchen. The opposite wall was filled with cupboards and a sink. And of course no running water nor sewers. The long kitchen table surrounded by twelve chairs dominated the room. At Christmas and holidays we used to gather around it with family and friends.

I went to the “well” and opened the hatch. Hoisting the bucket up and taking one bottle. Putting the bucket back, closing the hatch. Walking to the cupboards, I took two glasses out. Satisfied I carried my items outside to where my grandmother was sitting.

After pouring the cool lemonade in the glasses and offering one to my grandmother, I sat down in the swing beside her. Letting the gentle swing and the warm summer breeze lull me into sleep.

After for what seemed an eternity, I finally opened my eyes and I was back in the present. The grass still green, field still filled with yellow dandelions, smiling at the warm memories of childhood and my trip back in time. 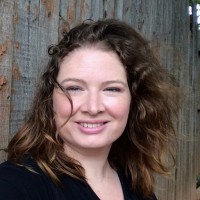